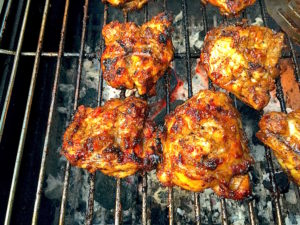 I tried cooking Jerk Chicken for the first time one weekend in 2016 and have to admit I was a little nervous because I took the bounty to a friends BBQ – and we literally cooked it on the go before I’d chance to actually tasted it before going “public”.

On top of this I didn’t have any honey in the house when I made the Jerk marinade so I had to use some golden syrup instead.

The really good news (for me that is) is that I think it was some of the best chicken I’ve tasted from a BBQ. The jerk had a good bit of a kick from the Scotch Bonnets but softened nicely by the golden syrup. The secret to the cooking Jerk Chicken, is to take your time and cook over a medium heat slowly, rather than rushing and burning. The slower and smokier the better, in fact a good tip is to put some wood chipping’s on to help ‘smoke’ cook your chicken for a more authentic flavour. By the way I didn’t have any of these either and they still tasted amazing!

If you think you don't like onion soup I promise this will change your mind... more